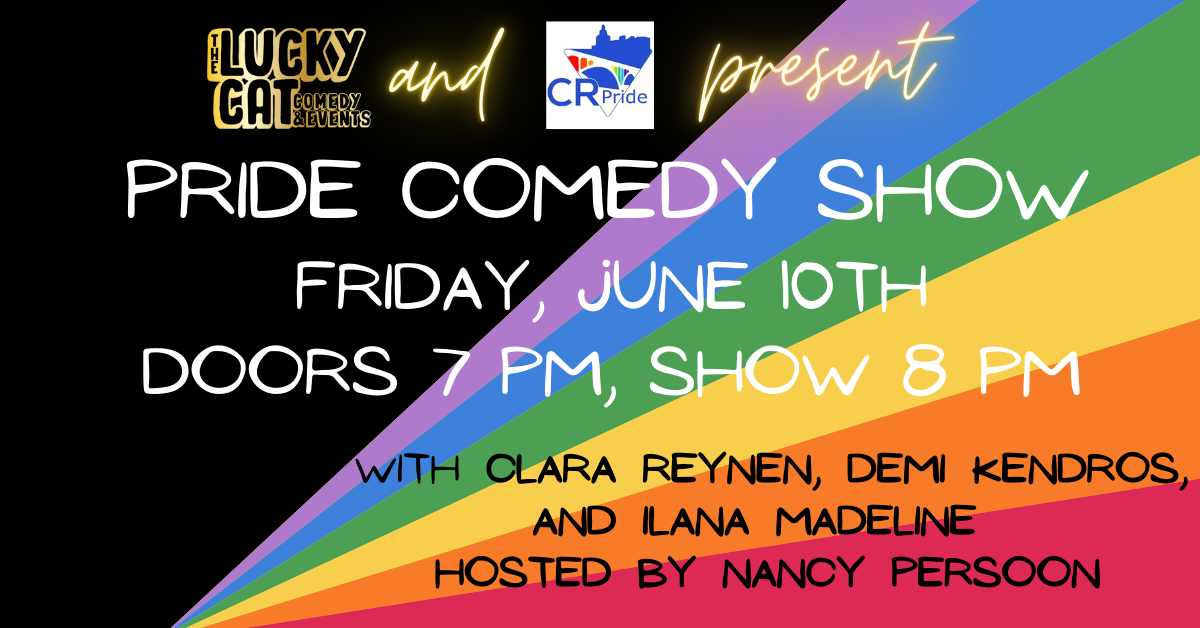 The Lucky Cat and CR Pride are proud to present our 2022 pride show!

Clara Reynen is a comedian, writer, and future punk librarian. She has been featured on shows while living in Iowa, Delaware, and California.

She is one of the founding members of The Treehouse in Iowa City, and formerly hosted Secret Standup.

Clara’s essays can be found on her website, clarareynen.com.

Demi Kendros (they/them/their) is a local comedian, theatre artist, and entrepreneur. A professor described their comedy as “delightfully vicious” while another said, “I don’t know, they never showed up to class.”

Ilana is a stand up comedian from Cedar Rapids, Iowa. Her one-of-a-kind outlook and experiences help her keep the audience in stitches. She has worked across the Midwest in clubs, bars, and living rooms. Ilana has been on the Blames comedy festival as well as Turnbuckle Fest. She has opened for Bobcat Goldthwait, Tim Meadows, and Theo Von.

Nancy Persoon’s pronouns are they/them/Princess Toadstool. Once considered to be nominated for Funniest Comedian in the Corridor, Nancy is a staple in the downtown Iowa City bar scene. After an “incident” involving a box of matches, Nancy has made a name for themselves by committing mass amounts of identity theft. After dedicating their new life to kitting and making small vermin disappear, Nancy spends their free time doing “comedy.” But I don’t know, readers – ask them about their ex-wife.