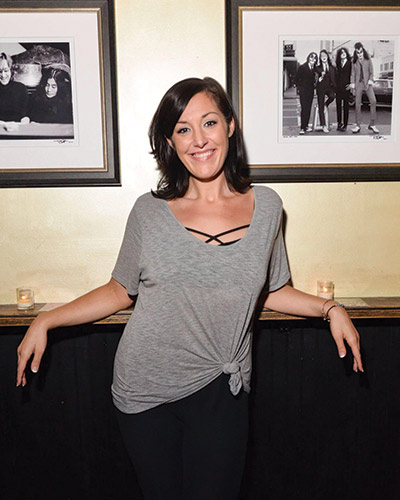 Reena Calm was made in Israel and raised near Boston. Obsessed with comedy she moved to Chicago, and has made a name for herself as a favorite in one of the best comedy cities in the world. She’s become one of the most respected and requested comedians in the Midwest, and is now a nationally touring headliner.Reena’s material is autobiographical, silly, and charmingly inappropriate, pulling from a lifetime of questionable choices.

Speaking of questionable choices, she is currently the only woman in America who lives on the road as a full-time stand up comedian. Living out of a tricked out Prius, this pun-slinger travels the country on her signature #Calmedy tours. She’s on a mission to make people laugh in all 50 States (just a few left to go).

She’s opened for legends like Arsenio Hall, Laurie Kilmartin, and Eddie Pepitone, to name a few. Reena has been a frequent guest on WGN Radio, was on the Doug Loves Movies podcast, and was named Comic of The Week on The Jackie & Laurie Show. She recently recorded her first “CALMEDY” album with Helium Comedy Records, to be released later this year.

Check out her book “Once A Pun A Time…Legend of a Sighs Queen” on Amazon. Reena’s been called “a one woman punk band of a comedian” by Jeff Bailey, “everything comedy should be” by Sam Tallent, one of “the best independent comics in the country” by Clearwater Comedy, “also terrific” by the Chicago Tribune, and “NOT a disappointment” by her mother. She hopes to do a show in your town soon, and would love to sleep in your finest parking lot. Follow her on Instagram for pictures of her #ViewnitedStates travels @ReenaCalm.